This is actually a story about a good friend of mine that unfortunately didn't survive DV! 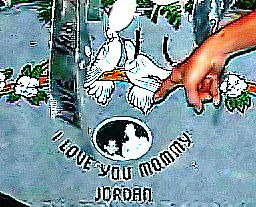 I observed him in a Dollar Store parking lot screaming at her! While beating her, he was also dragging her into his car. He then began to choke her! As he drove off I called 911 and followed the arguing couple. Due to the defensive fighting of this young woman, the car crashed into some trees. As the young man began to exit the car, I realized he was about to run. So I held him up at gun point until the police arrived. These were the words of a witness of A False Imprisonment case ,that landed a man ,named Michael Philpot, in prison for two years and six months.


Pamela Pafford feared for her life! These were her words as she petitioned to get a restraing order against that same man. " He went to prison for false imprsonment against me...he pulled me into his car at the Dollar Store. I was kicking and screaming and he took off with me in the car. He wrecked because I was fighting him. An older couple had followed us and called 911. Before this incident he had choked me and put me in the trunk of a car. I was, and still am, very scared of him. He has threatened me and my family. He even tried to snatch my little boy from me one time, when we were arguing. He just got out of prison and I wasn't even notified like I was told I would be. He is very sneaky and I am in fear for me and my son. A Circuit Judge denied the petition for an injunction for protection against domestic violence. The judge stated that pam failed to allege facts sufficient to support the injunction.

Pamela Pafford lit up the local news and news paper with a headliner that brought chills to your back and tears to your eyes. " Lake City woman killed in collision". ....On Monday, February 18,2008, Pamela Pafford and seven year old son Jordon Gibbons were involved in a head on collision. Pam was driving a 1998 Honda Civic North on u.s. 41, when a 2000 Oldsmobile traveling south on that highway crossed into the northbound lane colliding with Pafford's car.

A witness that was two cars behind Pam was quoted as saying "He went into her lane and hit her. He got out of the car and I asked him if he was okay.....and then he got back in the car. It happened so fast, it was like it was unreal. I guess she noticed him coming over because she hit the brakes. She didn't slam on brakes but she applied the brakes because you could see her brake lights come on. I kept trying to talk to her but she wasn't responsive and the child wasn't responding at all. Pafford and her son were then flown by helicopter to Shands at the University of Florida, where she later died due to injuries and her son was left in critically injured.

Somewhere in the middle of all the action Philpot was seen running from the scene. For days you heard about this on the news and read about it in the paper. Philpot became th focus of a nation wide man hunt. People were flooding the police's phone lines with tips and passing out flyers to help catch him. Fifthteen days later he was captured at a hotel in Texas. A Third Judicial Circuit grand jury indicted Michael Philpot for second degree murder.


When the news of his arrest came out, there was a sigh of relief....but still,a heavy dark cloud hung over this town. Justice might have been served, but a woman that was well known and well loved had lost their life. A child had lost their mother, a mother had lost her child, and many had lost their friend. In a funeral that was filled past it's capacity, you could feel the grief all around the room. Tears of pain, tears of sadness, and tears of anger were cried from all. At the crash site, stories of memories were passed all around.....chuckles and laughter arose from a scene that had once been so sad. As time passed we knew it was time to go....and tears once again began to spread. Memories that we will never forget is now all we had.


I'm telling her story for all of her friends, family, and anyone wanting to remember her life and to keep her memory alive. It's also here to help anyone who might be in a similar situation that Pam was and needs help or someone to relate to. Her story is a celebration of Pam's life......but if it could help prevent this from happening to just one person.......well then.........Michael philpot loses...........and............PAM WINS!!!!!